The economy is always changing, and the shift toward digital assets and services has been going on for decades now. The coronavirus pandemic only accelerated an existing long-term trend when it ushered in video calls, online shopping, digital entertainment services, and remote work much faster than originally planned. The accelerated […]

The economy is always changing, and the shift toward digital assets and services has been going on for decades now. The coronavirus pandemic only accelerated an existing long-term trend when it ushered in video calls, online shopping, digital entertainment services, and remote work much faster than originally planned.

The accelerated digital transformation is here to stay, and smart investors will make sure that they make the most of this sea change. There are many ways to approach the digital economy as an investor, and you could fill many bookshelves with a complete set of advice on this topic. Today, I’ll just show you how Amazon (NASDAQ: AMZN), Roku (NASDAQ: ROKU), and Square (NYSE: SQ) are poised to ride the digital economy wave further and higher than anyone else.

Amazon covers two important bases on the digital-business playing field. The company is synonymous with e-commerce for millions of consumers, and information technology pros see it as a leading provider of cloud computing services. This should be the first stock that springs to mind when you’re looking for investment ideas in the coronavirus-accelerated digital economy.

You might think that you missed the boat already. Amazon shares have gained 70% so far in 2020. Investors enjoyed a six-bagger over the last five years and a staggering return of 1,950% in the past decade. Amazon is one of the largest companies in the world with a market cap of $1.6 trillion.

Critics made the same mistake five years ago, and 10 years ago, too — and 15. Amazon has always looked expensive and surely headed for a dramatic drop in the near future. How much bigger can this behemoth grow, anyway?

The answer is, Amazon can grow a lot larger. E-commerce may be booming right now, but online shopping still accounts for just 20% of all retail activity in the U.S., according to the Department of Commerce.

The e-commerce slice of total retail sales is even smaller in most countries, and it’s a big world out there. The American economy accounted for just 16% of the global economy last year, based on data from the World Bank. Yet only 29% of Amazon’s second-quarter retail sales came from abroad. If Amazon and friends manage to saturate the domestic market, the next step would be international growth.

And we haven’t even talked about Amazon Web Services (AWS), which generates 12% of Amazon’s total revenue but more than half its operating income. AWS essentially created the market for cloud computing services and remains the leading player by far in that booming sector.

Amazon is a gigantic company that continues to grow like a hungry little start-up. If you don’t own this fantastic stock yet, you need to grab some today. It really is that simple.

Entertainment options are moving online in a hurry. Music lovers are turning off the radio and firing up streaming services like Spotify (NYSE: SPOT) instead. The best TV series are often found on Amazon Prime Video or Netflix (NASDAQ: NFLX) nowadays, and the same services are stealing eyeballs from the movie theater industry.

The COVID-19 crisis put a complete stop to cinema operations for several months, clearing the slate of movie premieres almost entirely. Some long-awaited titles have been pushed into 2021 and others simply premiered directly on media-streaming services instead.

You could bet on this exploding market by investing in Netflix, Spotify, or Amazon, of course. But what if I told you that you don’t have to pick a winner in the crowded digital content markets? Media-streaming technology expert Roku powers a lot of the hardware that brings digital content to consumers, both through its own set-top boxes and by licensing its battle-tested software to makers of smart TVs.

The company sprinkles its streaming platform with a generous dose of advertising dust. That’s the core of Roku’s business plan these days, taking the baton from hardware sales and software license royalties. The genius of Roku’s advertising approach is that you hardly even notice it. Paid ads often look like helpful recommendations for what to watch next. When Walt Disney (NYSE: DIS) launched the Disney+ service, for example, the House of Mouse paid Roku for prime-time banners promoting The Mandalorian and the service itself. Viewers signed up by the millions, and Disney+ was off to a running start.

Roku is destined to become a giant of the digital entertainment industry. The company speaks softly and carries a large stick, already acting like a kingmaker in the streaming media sector. That’s with annual sales of just $1.35 billion and a relatively small market cap of less than $25 billion. Pick up some Roku stock today and watch the company grow into its breeches over the next couple of decades.

It’s hip to be Square

Let’s swing back to the retail space again. Square lets traditional retailers collect payments, manage their invoices, offer gift cards, and much more — all on a native digital platform. The company’s services create a bridge between traditional retailing and modern e-commerce.

The company’s clients embrace all-digital payment and order management services, and it’s a game-changing trend. Consumers are wary of using cash during the pandemic, preferring contactless payments through card readers and online ordering systems. One out of 12 of Square’s customers was running a cash-free business model in March. By July, that ratio had exploded to about 1 out of 4.

Square’s own business is skyrocketing. Second-quarter sales jumped 64% higher year over year, exceeding Wall Street’s estimates by 48%. The stock has nearly tripled in 2020 as well, posting gains of 170% so far.

This is a next-generation financial technology giant in the making. I expect Square to invest the windfall from its current period of high-octane growth into a broader set of financial services. The next generation will see Square as a perfectly normal leader in digital banking and retail services.

10 stocks we like better than Amazon
When investing geniuses David and Tom Gardner have a stock tip, it can pay to listen. After all, the newsletter they have run for over a decade, Motley Fool Stock Advisor, has tripled the market.*

David and Tom just revealed what they believe are the ten best stocks for investors to buy right now… and Amazon wasn’t one of them! That’s right — they think these 10 stocks are even better buys. 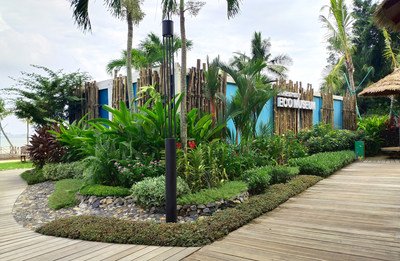