In The Little Book That Builds Wealth, Pat Dorsey explains: unless a company has some kind of economic moat, predicting how much shareholder value it will create in the future is pretty much a crapshoot, regardless of what the historical track record looks like. Looking at the numbers is a […]

In The Little Book That Builds Wealth, Pat Dorsey explains:

unless a company has some kind of economic moat, predicting how much shareholder value it will create in the future is pretty much a crapshoot, regardless of what the historical track record looks like. Looking at the numbers is a start, but it’s only a start. Thinking carefully about the strength of the company’s competitive advantage, and how it will (or won’t) be able to keep the competition at bay, is a critical next step.”

The term economic moat was popularized by Warren Buffett and refers to the ability of a business to maintain an edge over its competitors. A moat is a structural and sustainable competitive advantage that can drive long-term earnings and market share, which in turn is likely to be reflected in the price of the stock.

There are five main economic moats:

Because of their compounding nature, network effects are often recognized as the most powerful economic moat. They are defined as the “phenomenon whereby increased numbers of people or participants improve the value of a good or service.” Network effects are present for many businesses of the digital economy. In consumer technology, they are most commonly sought as a path for sustainable growth. Social media or e-commerce platforms are often recognized as businesses greatly benefiting from such moats. In many ways, strong network effects can reinforce other moats such as brand and scalability.

But not all network effects are born equal. They can take many shapes and forms. For marketplaces, the key is for offer and demand to increase in tandem. For platforms, the key is for users to remain engaged in the ecosystem. Network effects can expand an addressable market over time, but some businesses may reach saturation and see a lower value from additional users once they reach a certain point. The commoditized nature of a business can also lead to a misguiding perception that the growth is exponential, right when it’s on the verge of running out of steam.

Today, I want to review in more detail five types of network effects that can be identified in the companies of the digital economy and why they should have a place in your portfolio, in one form or another. 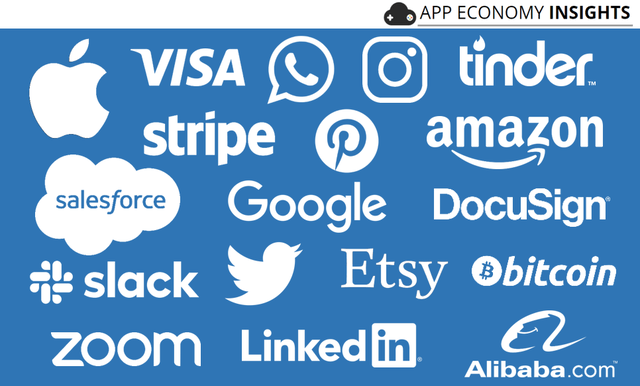 The Different Types of Network Effects

There is a wide range of literature about the various types of network effects and how we can break them down. Among those that have done a tremendous job in the matter, I want to highlight the work of seed-stage venture firm NFX, that regularly has excellent posts on how to differentiate network effects and their nature. Andreessen Horowitz is another fantastic source of deep dives into what makes a network effect sustainable or not. 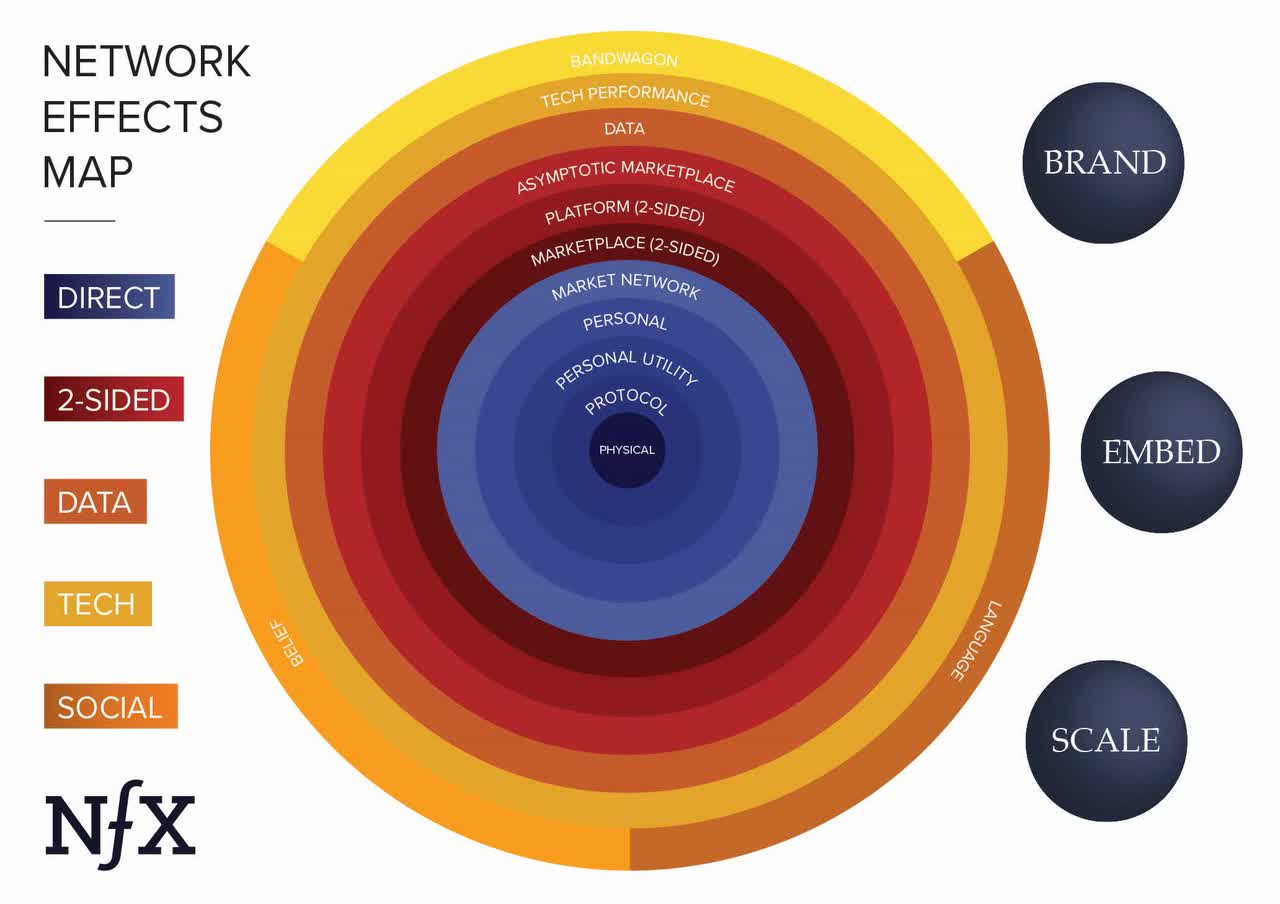 NYU professor Arun Sundararajan has classified network effects into broad categories such as: 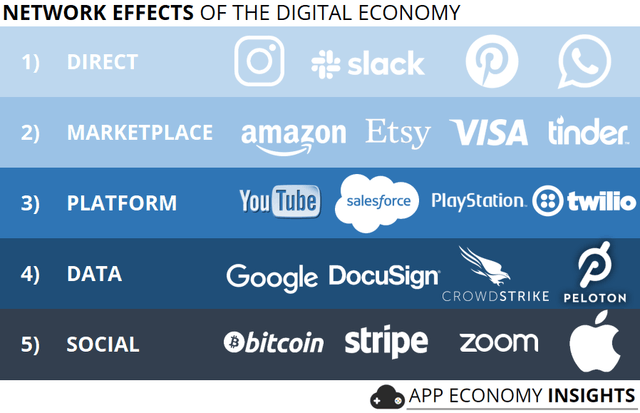 Direct network effects are the easiest to identify. You can think of any product you are using that improves if people around you join in. You immediately benefit from an increase in usage from other members. Your personal identity and reputation are usually at stake and you can derive more value as you engage with the product and see more of your own network join the platform.

The properties of a direct network effect are usually personal. These businesses often serve as an extension of your existing relationships in real life. Social media platforms and messaging apps are the core of this category. They serve different purposes, but end up benefiting from the very same moat. More users beget more users, because of the personal nature of these platforms. Each user has an interest in seeing more people join to derive more value for themselves.

Platforms benefiting from direct network effect are often difficult to leave because of how intertwined they are with our personal lives. They are often used daily and are a fundamental part of our lives.

Marketplace network effects come into play when a company derives its business from bringing together offer and demand, customers and suppliers, in some kind of marketplace.

Companies that fail to maintain a marketplace network effect will usually fail to retain users in their ecosystem over time. They may have a poor product-market fit, where their low price was the only reason people joined originally. Trust and authenticity are also key aspects of a marketplace. Be it critical mass or reputation, once a marketplace-like business is growing at a healthy and consistent pace, chances are it will do so for a really long time. The virtuous cycle at play makes these businesses highly defensible.

Platform network effects occur when a company can keep a user engaged in its product ecosystem. This is a category that Alex Moazed wrote about extensively in his book Modern Monopolies: What It Takes to Dominate the 21st Century Economy. He explains:

Software is a commodity. The real value is in the ecosystem.

Companies that manage to build an ecosystem in which new users and developers add more value can be an extremely powerful moat. It should be no surprise that this kind of moat has created some of the biggest companies in the world.

Data network effects occur when a business is gaining a structural advantage by gathering user data. This advantage can become very powerful when the data itself, in turn, becomes more valuable to users. 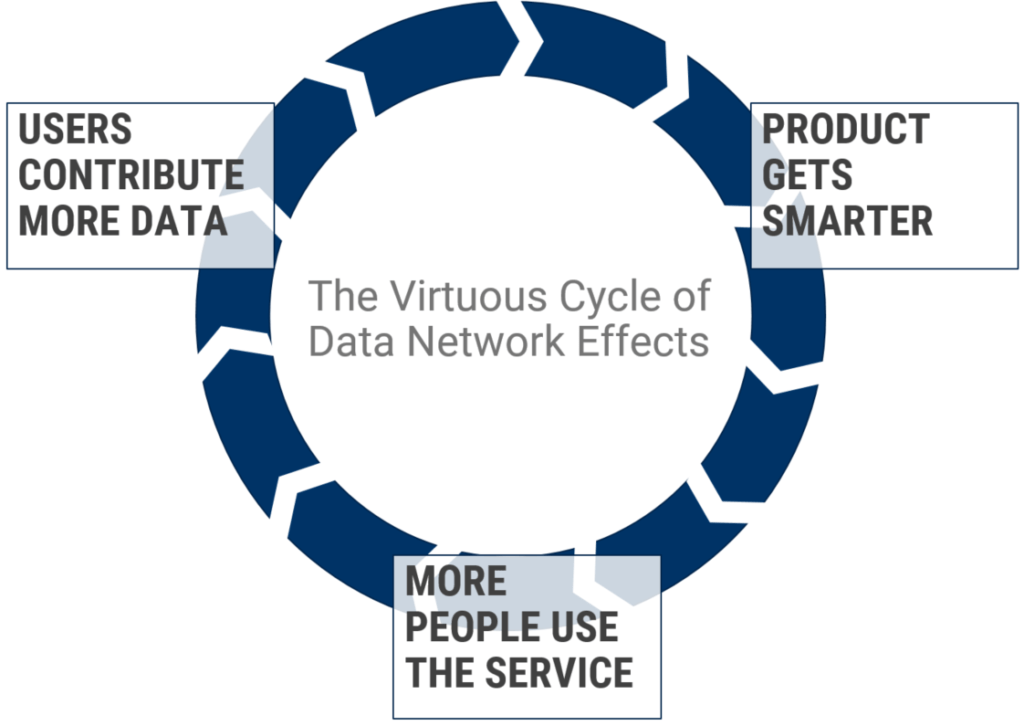 In many ways, a data network effect is more defensible than a Brand because it’s harder to replicate. The first mover can greatly benefit since the data accumulation can maintain and grow an edge over competition. The main risk is often linked to larger companies that may be offering the same product or service as part of a horizontal strategy. For example, Google is rendering Yelp (YELP) somewhat useless. With aggressive bundling efforts, Apple Music and Amazon Music will discourage many to opt for a Spotify premium account. The retention strength of a platform like Peloton applies to any other service in the fitness category, challenging the sustainability of the competitive advantage.

An important distinction to make here is that the “social” nature of this category has nothing to do with social media. Here, we are talking about human nature and how it can be a natural source of growth once the right assortment of favorable factors kick in.

Social network effects are in many ways the strongest kind of network effects. They are built from the initial strong appeal of a product or service, and create a compounding effect to the existing success story once they kick in.

Platforms that become so ubiquitous that they become an official standard, part of our language, or simply reach a cult following have possibly the strongest kind of network effect at play. They become stronger every time they gain a new believer, which in turn rewards the existing community of believers. Technology disruption is likely the most prominent risk for businesses that manage to enter this category. After all, Xerox (XRX) is a verb, but that doesn’t make it a good investment today.

Not all network effects are born equal. But even those that may appear the weakest at first can turn out to be the strongest ones.

Several companies discussed today are already among the largest in the world. And they already were many years ago. After all, a company like Facebook was valued at $41 billion when the movie The Social Network was released in theaters in 2010. The company is 18 times bigger today.

Many investors will consider these businesses too big, and they will consider them as being already “played out.” By doing so, they are overlooking the underlying strength of their network effects.

It’s one thing to understand and appreciate the economic moats of a business. But it’s another to buy shares of said business and hold them for many years to let the story play out.

One thing is certain. Those who have capitalized on the companies that demonstrate network effects in their portfolio have done extremely well in the 21st century so far. And I bet that they will continue to do so looking forward.

Let me know in the comments!

If you are looking for a portfolio of actionable ideas like this one, please consider joining the App Economy Portfolio. Start your free trial today! 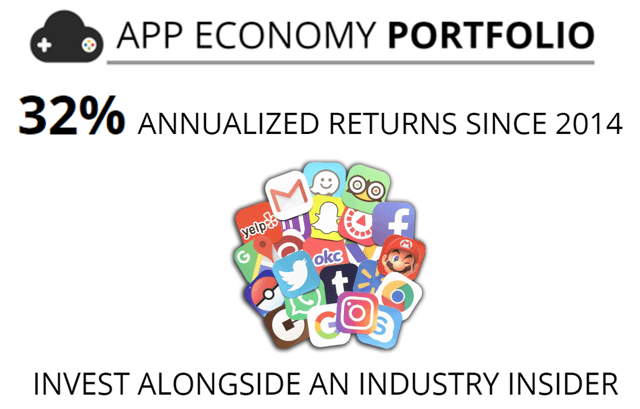 Disclosure: I am/we are long AAPL, AMZN, BTC-USD, CRM, CRWD, DOCU, ETSY, FB, FSLY, GOOG, MTCH, PINS, TCEHY, TWLO, V, WORK, Z. I wrote this article myself, and it expresses my own opinions. I am not receiving compensation for it (other than from Seeking Alpha). I have no business relationship with any company whose stock is mentioned in this article.

Tue Oct 6 , 2020
The MarketWatch News Department was not involved in the creation of this content. Sep 25, 2020 (The Expresswire) — “Final Report will add the analysis of the impact of COVID-19 on this industry.” Global “Mobile and Wireless Backhaul Equipment Market” report 2020 gives complete research on market size in the […]