NEW YORK, United States — Like TikTok itself, the battle for ownership of the video-sharing platform has been utter chaos. But unlike TikTok, which has become a key marketing platform for brands looking to connect with Gen-Z, the fight to determine who controls its user database has been anything but joyful. […]

NEW YORK, United States — Like TikTok itself, the battle for ownership of the video-sharing platform has been utter chaos.

But unlike TikTok, which has become a key marketing platform for brands looking to connect with Gen-Z, the fight to determine who controls its user database has been anything but joyful.

The latest news: After pressure from President Trump and other officials to sell TikTok to a US entity or risk it being shut down, Chinese parent company ByteDance struck a deal with mega-retailer Walmart and tech firm Oracle to buy a 20 percent stake. Now, ByteDance has applied for approval of the deal with the Chinese government, which recently updated its list of restricted exports to include the algorithm that’s key to TikTok’s virality.

The outcome is far from certain. The state-controlled Chinese media is pushing against the deal, with an op-ed in China Daily calling it a “dirty and underhanded trick.” And there is certainly still the chance the US government will simply shut it down. Unlike the WeChat ban, which was blocked, at least temporarily, by a US court, TikTok does not have the power of Tencent behind it — and it will be harder for Bytedance to argue in court that it’s a necessary tool. (WeChat is the primary way many people in the US are able to remain in contact with China-based relatives.)

But even if the Chinese officials approve the deal, how it would be structured is unclear. Who will run it? Who will own its database of US users? How can the new owners access ByteDance’s source code for TikTok? And perhaps most importantly, who will control the algorithm?

After all, TikTok’s algorithm — its ability to surface posts from lesser-known creators as easily as it does superstars — is what has made it so successful. The more you post, the more the algorithm notices you — it weighs the number of followers far less heavily, shifting brands’ focus away from megastars-only, opening them up to partnering with up-and-comers, too.

The app’s pandemic-era success has also been a financial boon for some. For instance, in June 2020, when YouTube-turned-TikTok beauty star @skincarebyhyram posted a video of San Francisco-based skincare company Peace Out’s pore strip in action, the company sold through six-to-eight month’s worth of product in 24 hours. Hyram Yarbro is a superstar on the platform, so it’s no wonder his post garnered more than 2.8 million views and 9,000 comments. But just this past Sunday, @sarah_ novio, an influencer with a much smaller reach had a post go viral, and Peace Out sold $25,000 worth of products that day.

The more you post, the more you can turn a small person into a big person overnight.

Because of this success, Peace Out’s Chief Marketing Officer, Junior Scott Pence, is fearful of any changes to TikTok’s current structure. “The more you post, the more you can turn a small person into a big person overnight,” he told BoF, noting that TikTok’s bite-sized videos — mostly 15-60 seconds in length — are better for the creator and viewer. Instagram, where he was allocating more marketing spend pre-TikTok’s rise, just doesn’t offer the same return on viewership investment: or ease of use. “Now, Instagram is like your slow uncle,” he said.

While Pence and others are hoping that the Oracle-Walmart deal does go through, there are concerns about whether TikTok will maintain its chaotic magic, and whether TikTok would still be able to apply to its product what it learns from Douyin, ByteDance’s similar-but-separate social platform for Chinese users.

Like many brands, Peace Out is already thinking about scenario planning in case the deal falls through and TikTok is banned in the US. Right now, 30 percent of the company’s budget is allocated to TikTok, with plans to increase that share in 2021 if the platform is still up and running — and performing. If things change, Pence said he would move some of that money to Instagram and Instagram Reels; he’s also taking a second look at Snapchat.

While Instagram’s Stories briskly supplanted Snapchat for many consumers, its TikTok copycat, Reels, is not yet as popular with creators. In an August 2020 survey of over 800 influencers conducted by marketing agency Obvious.ly, 68 percent reported using TikTok, while 52 percent had tried Reels. However, 67 percent said that they anticipated using Reels more than TikTok — although it was unclear whether this was connected to the potential ban.

But the real quest for Peace Out and other companies will be to find the next big thing, whether that’s entertainment industry-backed Triller, Byte, which was created by a Vine founder and launched earlier this year, or something else. (In August, only 7 percent were using Triller, while 4 percent used Byte.) And there will likely be others.

“For the last five-to-seven years, there really weren’t weren’t any competitors to Facebook and YouTube, and those bold enough to challenge them were few and far between…resulting in an initial splash then fading out,” said Mae Karwowski, chief executive of Obvious.ly. “What was so exciting about TikTok was that it became a real contender almost immediately. If you can raise money and be the fill-in for TikTok, you’ve got a shot.”

THE NEWS IN BRIEF

FASHION, BUSINESS AND THE ECONOMY 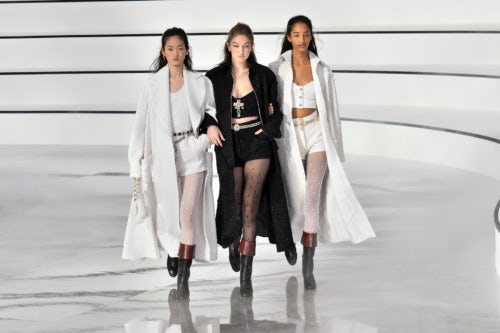 Delaware court expedites LVMH and Tiffany dispute, sets trial date for January 5. The court announced that it will fast-track the hearing on LVMH’s attempts to exit its $16 billion deal to acquire Tiffany & Co. While Tiffany had requested a ruling before the deal’s November 24 deadline, the judge set a trial date for January 5, 2021 — a month before US antitrust clearance is set to expire.

Nanushka’s owner launches new fashion group, buying Milan’s Sunnei. Sunnei has been a rare bright spot for independent designers on the Milan scene. The fund that owns Nanushka is buying the brand with help from the Hungarian government, and says it’s looking for more brands to invest in next year.

Nike smashes sales estimates thanks to rebound in China. Sales in China rose 6 percent and declined less than expected in the company’s biggest market of North America in the first quarter. Overall, Nike’s net income rose to $1.52 billion from $1.37 billion a year earlier.

Brookfield Properties to cut 20 percent of employees in retail unit. The mall owner has been hit hard by the pandemic  which has seen consumers have embrace e-commerce. The cuts will affect more than  2,000 employees who work in Brookfield’s retail arm. Brookfield’s shares have plummeted 40 percent since the start of the year.

Ralph Lauren to cut jobs amid accelerated e-commerce push. The cuts are expected to be made by March, which marks the end of its fiscal year. The company didn’t say how many jobs will be eliminated. The restructuring will result in pretax charges of between $120 million and $160 million, and comes as Ralph Lauren struggles to deal with the pandemic-induced economic crisis.

China luxury spend expected to jump 30 percent this year. It’s the only bright spot for the luxury industry, which is otherwise poised to see worldwide spending shrink 45 percent in 2020. The projection is yet another sign of China’s rapid recovery. The country is the only major economy to anticipate growth this year.

Chanel issues bond linked to climate targets. The luxury giant raised a $699 million bond with clauses linked to its environmental goals. The proceeds of the five- and 10-year deals issued by Chanel, which marked its first foray into the bond market, will likely be used for investments in eco-conscious startups developing alternatives to plastics or leather.

A $700 million commercial mortgage-backed security portfolio is on the brink as malls collapse. The bond’s performance shows how rapidly the pandemic is deepening losses in a sector that was already getting crushed by online shopping. The bond, known as Starwood Retail Property Trust 2014-STAR, is cutting interest payouts to investors for a second time, after a reserve account dried up in June.

THE BUSINESS OF BEAUTY 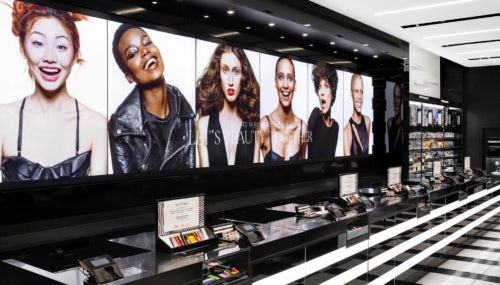 Inside a Sephora store | Source: Courtesy

Sephora offers same-day delivery with Instacart in the US and Canada. More than 400 Sephora stores in Canada and California will soon offer same-day delivery through grocery delivery service Instacart, as the retailer expands shopping services in a competitive market. The move comes as Sephora looks to alternative ways to facilitate sales in order to fend off competition from Ulta.

A second lockdown could shrink the UK beauty industry by 30 percent. Having only reopened for three months, reinstating restrictions would deal a harsh blow to both business and workers. The outlook for the beauty sector is particularly difficult as 54 percent of its workforce is  self-employed and can’t be furloughed. 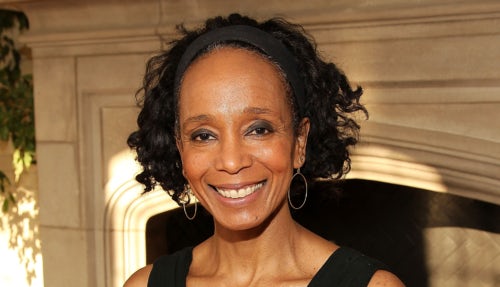 Robin Givhan named senior critic at large at The Washington Post. Givhan has been promoted to senior critic-at-large, effective immediately. Givhan has previously worked for Vogue and was awarded the Pulitzer Prize for Criticism in 2006. In her new role, Givhan will cover various topics, including politics, race, business and the arts. She will also write a weekly column. Givhan will report to Krissah Thompson, managing editor for diversity and inclusion at The Washington Post.

Bastien Renard appointed managing director of Fenty Fashion. Renard, who has spent 19 years at Nike and most recently served as vice president and general manager, has joined the LVMH-owned Fenty as its new managing director. Renard will report to Jean Baptiste Voisin, chief strategy officer at LVMH.

Chioma Nnadi named editor of Vogue.com. Nnadi, who most recently served as Vogue.com’s fashion news director, has been appointed editor of Vogue.com, effective immediately. Nnadi, who spent the last 10 years at the Condé Nast fashion title after stints at The Fader, Trace and the Evening Standard Magazine, replaces Stuart Emmrich and will oversee all of Vogue’s digital content.

Boohoo review finds ‘unacceptable issues’ in Leicester supply chain. The review found that some workers had not always been properly compensated for their work and that many were not fully aware of their rights and their obligations. Boohoo commissioned the review after allegations around the exploitation and mistreatment of factory workers emerged in July.

Amazon announces latest sustainability push. The e-commerce giant will start labelling products that meet select sustainability certifications on its US website, joining a growing list of companies seeking to target conscious consumers. In order to qualify, products must meet certifications like Cradle to Cradle, Fairtrade, the Global Organic Textile Standard and clean chemistry standard Bluesign Product. More than 25,000 fashion, beauty and household products will be included in the programme when it launches.

Lawmakers call Amazon warehouse unsafe after surprise visit. Representative Rashida Tlaib raised concerns about the Michigan-based warehouse, tweeting a video showing Amazon workers cleaning the facility, while she and her fellow representative Debbie Dingell waited for a tour. The lawmakers say they saw only one cleaning squad for the 850,000 square foot warehouse and observed workers bypass temperature checks.

Shopify says ‘rogue’ employees stole data from merchants. Two employees stole data from more than 100 merchants, potentially exposing the personal information of consumers who shopped on web stores that use the company’s e-commerce software. The customer transaction records of some shoppers were taken on September 15, and Shopify has since terminated access to its network for the two employees involved in the scam.

Sat Oct 3 , 2020
Alona Gornick, a principal on the senior loan origination team with Churchill Asset Management LLC, a specialist investment affiliate of Nuveen, has been honored as a “Rising Star” by Private Debt Investor. The list was judged by the publication’s senior editorial team and recognizes private credit professionals under 40 for […]