Former Louisiana Governor Bobby Jindal weighs in on the first presidential debate and Trump and Biden’s economic agendas. One thing we learned from the debate in Cleveland last Tuesday, when President Trump wasn’t interrupting, is that Democratic presidential nominee Joe Biden makes up numbers on the fly. There was a lot […]

One thing we learned from the debate in Cleveland last Tuesday, when President Trump wasn’t interrupting, is that Democratic presidential nominee Joe Biden makes up numbers on the fly. There was a lot of fibbing going on. Consider this exchange between the two candidates:

WALLACE: Sir, wait. Is it fair to say he blew it when … there was record low unemployment before COVID?

VOTERS SAY ECONOMY IS MOST IMPORTANT KEY ISSUE AHEAD OF ELECTION: POLL

He went on to say that President Barack Obama created manufacturing jobs, but they fell under President Donald Trump.

The claim that Trump “blew it” when he became president is quite a claim given that the unemployment rate, the poverty rate, the interest rate and the inflation rate hit all-time lows in 2019, according to the Census Bureau and the Department of Labor. Employment, wages, median incomes and wealth hit an all-time high.

Median households saw a $6,400 gain in real income in three years under Trump, compared with the approximately $4,000 increase made in eight years under Obama and Biden. As one who served as an economic adviser for Trump, I can say definitively that these were exactly the results from our tax cuts, deregulation efforts and pro-America energy policies. They worked like a charm.

One of our proudest results was the surge in blue-collar employment under Trump.

Here are the numbers for the eight years of Obama’s presidency and the first three years under Trump (prepandemic):

Yes, under the early months of the pandemic, when government-imposed shutdowns ground industrial production to a virtual halt, the factories were bolted shut. That would have happened if Abraham Lincoln, George Washington, Mother Teresa or Hillary Clinton were president during this public health crisis.

US GROWTH REPORT TO SHOW A RECORD-BREAKING ECONOMIC PLUNGE

What matters is the status of blue-collar jobs before the pandemic and since the economy has started to reopen.

GET FOX BUSINESS ON THE GO BY CLICKING HERE

Since the shutdowns ended, blue-collar jobs have been surging back. Several hundred thousand manufacturing jobs have come back, and many factories and construction sites now have “for hire” signs in the windows.

Biden is right that we still need to get hundreds of thousands of these high-paying blue-collar jobs back in Ohio, Pennsylvania, Michigan, Wisconsin and New Jersey, among other states.

Trump wants to do that by continuing to cut taxes and promote American energy production. Biden wants to do it by raising taxes by $4 trillion.

Americans will have to decide which approach will work better.

Stephen Moore is a senior fellow at the Heritage Foundation and an economic consultant with FreedomWorks. He is the co-author of “Trumponomics: Inside the America First Plan to Revive the American Economy.”

Why Dell Partners Must Use Dell Digital Marketing Tool

Tue Oct 6 , 2020
Dell, known for its progressive marketing programs, utilizes cutting-edge technology to help marketers keep up with advances and create relevant experiences for their customers. FREMONT, CA: According to recent research, 86 percent of marketing professionals agree that successfully combining multiple channels under a single integrated marketing strategy is critical to […] 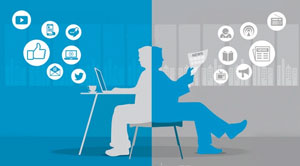