Rudy Heimark started hauling beer in the 1930s, driving a lone truck into Indio and later the Mojave Desert to slake the thirst of Army troops training under Gen. George S. Patton. From that modest, dusty beginning, Heimark and his family built a monument to American entrepreneurial spirit. © (Courtesy […]

Rudy Heimark started hauling beer in the 1930s, driving a lone truck into Indio and later the Mojave Desert to slake the thirst of Army troops training under Gen. George S. Patton. From that modest, dusty beginning, Heimark and his family built a monument to American entrepreneurial spirit.


Now their Triangle Distributing Co. is headed for the dustbin of history.

On Oct. 2, its 80,000-square-foot warehouse in Santa Fe Springs, a fleet of 35 semi-trucks and1,800 customers will be swallowed up by Anheuser-Busch, the world’s largest brewery. Most of the company’s 100 or so workers will be absorbed into Anheuser-Busch’s workforce of 18,000.


The sale of Triangle was spurred in part by the COVID-19 pandemic, which devastated business at bars and restaurants. But it’s really part of a trend that’s transforming the global economy. And though that trend has almost certainly boosted corporate profits, evidence suggests that it’s also contributed to higher consumer prices for some goods and services, and income inequality. Some economists say it’s stifled entrepreneurship and business investments.

For the Los Angeles area, the Triangle sale means that Anheuser-Busch, along with another industry powerhouse, Reyes Beverage, will be moving 90% of the suds local residents consume.

“When you have a duopoly, that tends to start easing prices up,” said Peter Heimark, Triangle’s president and the founder’s grandson. He recalls the days when 10 or more distributers battled for the local market.

Whether it’s beer or baby food, cellphones or hearing aids, healthcare, social media or search engines, markets for many goods and services all across the U.S. economy are now dominated by a handful of companies. The global pandemic and resulting recession are hastening that change: Hard times favor large firms with deep pockets.

The result is likely to be more mergers and takeovers of small companies like Triangle.

Recently, politicians in Washington, and even more in Europe, have been fretting that tech giants such as Apple, Facebook, Google and Amazon have amassed enormous wealth and market power, in part thanks to their huge repository of data on consumers. Their scale, infrastructure and clout with suppliers and distributors already made it hard for start-ups or smaller players to compete.

But the history of the last four decades suggests the fretting in Washington may not come to much. Far from opposing concentration, Washington has been a facilitator.

Often it’s just two, three or four firms that have the lion’s share of sales in a given industry and locale; that’s notably true in healthcare and phone services. And the giants tend to divide up markets and avoid sharp competition with one another. In 2008, Anheuser-Busch, an iconic American company, itself was swallowed up by a Belgian brewer, InBev.

The watchdogs have largely been silent, whether about preventing a monopoly or stopping firms from colluding at the expense of workers and consumers.

“Lax enforcement of hundreds of transactions over time has resulted in ‘creeping’ concentration in many markets, resulting in tight oligopolies and dominant firms,” the nonprofit group American Antitrust Institute said in an April report assessing the state of U.S. competition policy.

The situation has only gotten worse in the last 3½ years of the Trump administration as merger and cartel enforcement actions have declined, said Diana Moss, president of the group, an advocate for stronger enforcement. “We haven’t seen any monopoly cases to speak of,” she said.

Trump’s Justice Department did try to block AT&T’s merger with Time Warner, although many saw it as politically motivated, reflecting the president’s beef with coverage of him by Time Warner unit CNN. It was ultimately unsuccessful.

As of mid-September, the number of small businesses operating was down nearly 25% from the start of the year. Small firms’ overall sales were off almost as much, according to an economic tracker compiled by economists at Harvard and other institutions.

At the same time, profits have soared for some of the largest corporations as they take more and more market share.

Home Depot and Lowe’s already commanded about 80% of the home-improvement market — nearly double their share in 2002, according to Open Markets Institute — and they saw sales and profits boom in the quarter ended July 31. Home Depot’s earnings rose 25% and those for Lowe’s jumped 65%. It was a similar story for Walmart, which reported a 97% jump in online sales.


Even before COVID-19, Triangle’s Heimark saw the writing on the wall as consolidations meant fewer breweries were calling the shots on sales and distribution. Coors and Miller merged in 2008, and when Constellation, the big importer of brands including Corona and Pacifico, decided two years ago to distribute its products in Los Angeles through Reyes, Triangle’s business took a big hit.

“For us to be competitive and relevant, we needed access to other brands,” Heimark said. “The pandemic certainly made the decision easier.”

Corporations and private equity groups snapping up smaller operations or abandoned leases isn’t all that worries Sarah Crozier, spokeswoman for Main Street Alliance, a small-business advocacy group. So do resulting inequities in the supply chain for small businesses that remain.

“When there were distribution issues around toilet paper and all that kind of stuff, some of our small-business members were stuck to the back of the line while Amazon sort of gobbled up those contracts of distribution,” she said.

The middlemen, she added, “were going after the big corporate companies for the larger distribution orders, and it meant that small businesses, who had long-term contracts with distributors, were on an uneven playing field.”

Not everyone agrees that market concentration has been bad, including adherents of the free-market Chicago School that has greatly influenced the thinking around antitrust regulations over the past generation.

One is Joe Kennedy, a senior fellow at the Information Technology and Innovation Foundation, a nonpartisan think tank. He said a key question is whether firms have the ability to raise prices above what they otherwise would if the market were not highly concentrated.

Many don’t have that flexibility, he argued, because that would invite rivals into the market to undercut them. Kennedy said large, dominant firms can boost profit margins by cutting costs rather than increasing prices.

Economists say that’s what’s happening in some industries with the rise of so-called superstar firms, companies that are both comparatively innovative and efficient.

“Concentration is going up, but not to worrisome levels,” Kennedy said, adding that a lot depends on the locale. “You have to look at specific markets and not focus on concentration.”

Even so, data suggest far less benefit to the average worker or the economy as a whole. U.S. productivity overall has lagged since 2000, and labor’s share of national income has declined amid stagnant household earnings.

“Why is it that up until COVID, we were operating at around 3% unemployment and wage rates were barely moving?” asked Barry Pupkin, a veteran antitrust lawyer. He answered his own question: “What’s causing it is a lack of competition. Laborers couldn’t control the price of their labor [because] buyers of that labor have huge amounts of power and are controlling how much they would pay for it.”

To be sure, the decline in unions, increased foreign competition and greater outsourcing also have played a role. Meanwhile, the share of workers at companies with more than 5,000 employees has grown from 28% in 1987 to 34% in 2016, according to the latest Census Bureau data.

At Triangle, workers are expecting few changes when Anheuser-Busch takes over. Warehouse manager Frank Barron, a 25-year Triangle employee, said he’ll continue in his position, at the same pay.


The 54-year-old knows it won’t be the same; he loved Triangle’s small, family-owned company culture, which included an open door to the president. But Barron said younger workers may find more opportunities with a global corporation, and older ones like him were pleased with the new benefits package.

Though he sees risks that Anheuser-Busch could someday consolidate in the Los Angeles area, where it has four other facilities, the future of Triangle, on its own, was far from assured.

“Personally, it was a shock. I thought I was going to retire at Triangle,” he said. “Times are changing and we just have to adapt.”

Mon Sep 28 , 2020
A dynamic spreadsheet is your business plan dashboard, full of gauges that recalculate as you update … [+] what you need, what you learn, and ultimately, what happened. getty This is the fourteenth edition of my New Regular series devoted to helping small business owners have the maximum opportunity to […] 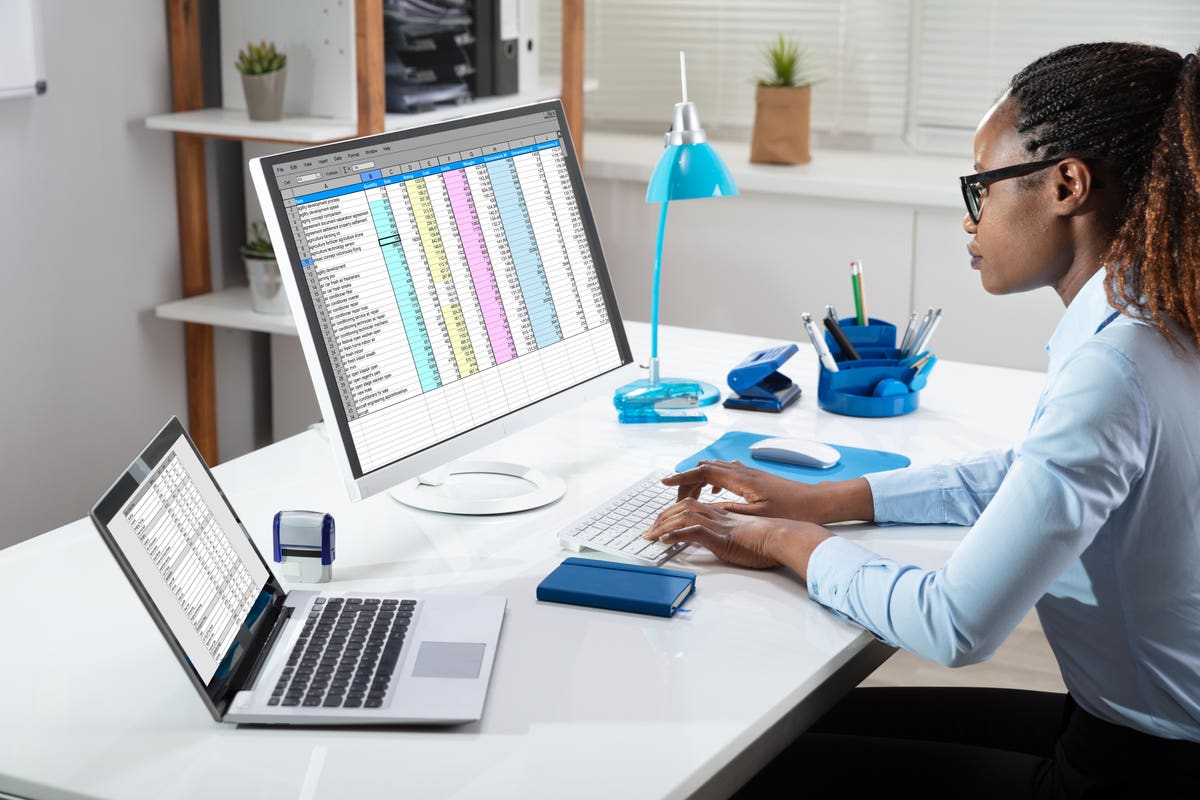