Last week, Brazil’s COPOM (Committee for Monetary Policy) met to discuss the current economic environment, not only in Brazil but around the world. The meeting had one overall result, which was to maintain current interest rates: the country’s Taxa Selic will stay at 2% p.a. Although this event might not […]

Last week, Brazil’s COPOM (Committee for Monetary Policy) met to discuss the current economic environment, not only in Brazil but around the world. The meeting had one overall result, which was to maintain current interest rates: the country’s Taxa Selic will stay at 2% p.a. Although this event might not seem newsworthy, it tells us a great deal about the recovery of the South American economy.

Unlike other central banks around the world such as the U.S. Federal Reserve, Brazil’s Central Bank has just one responsibility: to keep inflation low. COPOM is the committee selected for this fundamental task and its main tool is the ability to adjust interest rates.

In Brazil, the basic interest rate that guides the market is called the Taxa Selic. The committee lowers or increases the Taxa Selic to make money cheap or expensive, respectively. As a result, consumers are incentivised to spend or save, impacting inflation directly. Low spending generally means prices will not rise, while increased demand tends to raise the price of goods. 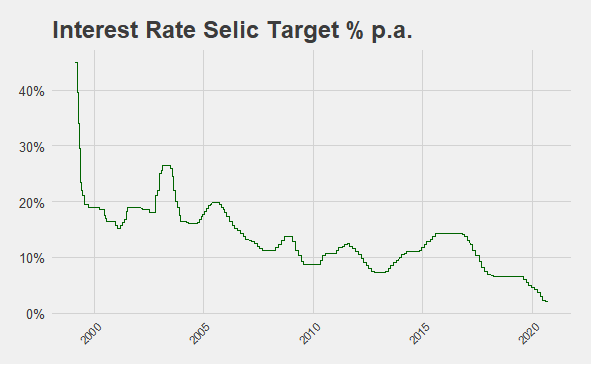 For the last twenty years, Brazil has had a very high Taxa Selic. Double-digit interest rates usually mean slow growth for an economy as enterprises and individuals are less inclined to borrow. Credit lines and other forms of borrowing, such as debt issuing, are fundamental for a country’s economic growth as they allocate capital to expanding companies. In theory, facilitating capital acquisition by companies translates into more production, low levels of unemployment, and the development of industry. Compared to other emerging economies, Brazil’s recent GDP growth has been weak, as can be seen in the figure below. 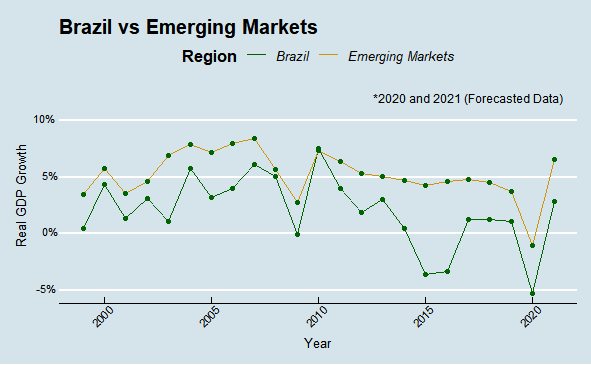 For the previous nine meetings, COPOM has cut interest rates. The Taxa Selic has never been as low as it currently is. At the most recent meeting, however, COPOM decided to maintain the current Taxa Selic instead of cutting it further.

As economic growth is directly related to interest rates, the decision to maintain the current Taxa Selic suggests COPOM does not believe the economy is in need of an extra push. Instead, COPOM decided to be cautious about possible inflation. This decision is encouraging as the central bank of the biggest economy in South America signals optimism with regards to economic recovery.

Brazil’s monetary policy has been moving toward low interest rates since well before the pandemic outbreak. This is very promising for Brazil as it means enterprises can obtain cheaper capital and experience fast growth in the near future. Moreover, inflation – the destabilising factor that could produce a rise in credit prices – is currently below the Central Bank’s target of 4% p.a. If the bank’s monetary policy works and inflation stays low, the country’s economy could perform well in the coming years.

The word inflation tends to carry a negative connotation; however, many countries around the world desire moderate inflation. A controlled increase in prices reflects economic growth. In fact, during the current pandemic, inflation has been a positive sign for economies as they emerge from strict lockdowns.

In Brazil, inflation is measured by the IPCA (National Consumer Price Index), which grew to 2.44% for the TTM (trailing twelve months). The Central Bank interpreted this as a sign of a sufficient economic recovery to leave interest rates unchanged. As mentioned previously, the agency does not believe the economy is in need of an extra push. 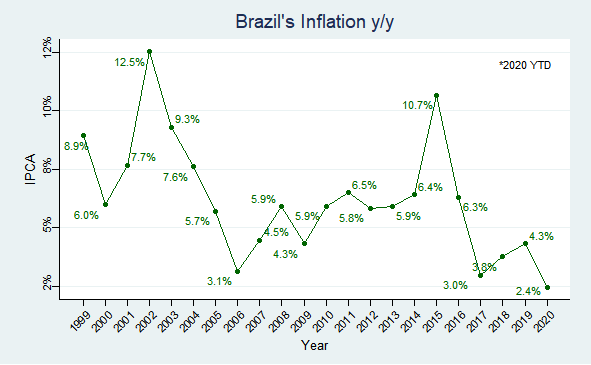 COPOM could have lowered the Taxa Selic as markets were expecting it to, and as it had done over the previous nine meetings; yet it decided to stay conservative. As mentioned earlier, interest rates control inflation but they can also deter economic growth. Brazil has a good opportunity to move from historically high interest rates towards a lower Taxa Selic that is more attractive for the private sector.

Nevertheless, the country has to overcome the ghost of high inflation rates. Looking forward, COPOM has already declared that for 2021 and 2022, we can expect the Taxa Selic to increase to 2.5% and 4.5%, respectively. South America’s gem has great potential, but a long way to go.

Editor’s Note: The summary bullets for this article were chosen by Seeking Alpha editors.