It has historically been a solidly Republican district.

The debate was broadcast live from the WGCU studios on the campus of Florida Gulf Coast University. Julie Glenn, news director of WGCU Public Media moderated the event with The News-Press/Naples Daily News reporter Amy Williams and John Davis of WGCU questioning the candidates.

Many of the questions were submitted by members of the public. The following are how the candidates responded, by subject.

Banyai was sharply critical of the Trump administration’s response to the COVID-19 pandemic, which has claimed the lives of more than 205,000 Americans since March — about 20% of the global death count. She noted that Trump told journalist Bob Woodward earlier this year that he was downplaying the severity of the threat.

She said the federal government should have acted more swiftly to address the pandemic by more forcefully pushing mask-wearing and social distancing mandates as other countries have. Florida’s GOP leadership has opposed mask mandates, opting instead for just encouraging their use.

“Masks work, and they protect others from you. It doesn’t matter how healthy your own family is, you can still pass it on to somebody else,” she said, adding the government has long had other safety requirements. “If you drive drunk you go to jail. If you don’t wear a seatbelt you get a ticket. If you sell drugs, you go to jail.”

Donalds said he doesn’t believe the government has a right to make such requirements. He added that masks are only one part of protecting oneself from COVID-19, along with hand-washing and social distancing.

“The choice is yours. The choice is not the government’s,” he said. “Yes, we have many things in our criminal code. But we are currently in an emergency situation, one where, frankly, we’re actually getting better every single day here in the United States and especially in Florida.”

Donalds also defended the Trump administration’s response to the pandemic, noting that it enacted restrictions on travel from China and Europe before the coronavirus was widely identified throughout the United States. He added that he believes local hospitals and first responders “had every piece of (protective gear) necessary” to treat the region’s infected.

Experts say that Florida is particularly at risk from a changing climate, especially as sea levels continue to rise, making summers dangerously hotter and leading to more frequent (and powerful) hurricanes.

Donalds said he believes the science on climate change is “not settled,” particularly as it relates to humanity’s role in causing it. (Politifact has rated similar comments as false, noting that scientists have concluded that human activity is largely to blame.)

“What we do know is that seas are rising, sea level rise is real. It is impacting parts of Florida and, frankly, parts of the world,” Donalds said. “Is there something that we should be doing with a coordinated federal response on sea level rise? Perhaps.”

He added that the U.S. continues to see declines in carbon dioxide emissions. Experts say that the declining use of coal is driving that trend. But, he said, he would not support “radical” solutions such as those outlined in the Green New Deal.

“All it will cause is for electricity prices to rise, and the poorest among us will suffer,” he said, adding later: “If you don’t have a consistent supply of cheap energy your economy suffers.”

Banyai has also called for the United States to return to the Paris Agreement on Climate Change and supports the Green New Deal legislation that would punish polluters and set guidelines for companies to better reduce their carbon footprints.

She responded to Donalds by arguing that the nation’s poorest are already suffering from the effects of climate change, noting the wildfires on the nation’s west coast that have left tens of thousands homeless.

And she said energy companies with virtual monopolies who lobby against alternative energy are already driving up prices.

“So saying that, by taking a challenge and a leap into the future with green technologies, that that is going to affect the poorest and the most vulnerable among us, is ridiculous,” Banyai said. “We have no choice but to do this if we want a future for our children and our grandchildren.”

Donalds has called Southwest Florida’s waterways the region’s “lifeblood of our community and economy.” He has said he’d work to make sure the Central Everglades Restoration Plan would continue to receive federal funding.

When asked about water quality during Monday’s debate he reiterated his call for such funding, noting that the Trump administration has asked Congress for $250 million in new funding.

And he defended the record of state lawmakers.

“In the Florida Legislature, we have taken actionable steps to clean our water,” he said. “In the last four years that I’ve served in your legislature, I have been a part of that work.”

Banyai noted that it’s up to Congress, not the president, to fund federal environmental programs. She said Congress should “fortify” the Environmental Protection Agency so that it aggressively goes after polluters.

She also called for more federal funding for local environmental projects and research.

“We know that water is the lifeblood of our economy here. It’s why so many of us live here and love Southwest Florida,” she said. “What we need to do is hold polluters accountable.”

On another water quality issue — the existing ban on offshore oil and gas drilling — both candidates were in agreement: The ban should remain in place.

Tax reform and the federal debt

Both candidates called for reforming the tax code, but each would approach it very differently.

Donalds said the federal government should tax more based on consumption, such as Florida’s sales tax, or it should implement a so-called flat tax that would set one tax rate across the board, with no deductions.

“Taxation should be simple,” he said. “It should not be convoluted.”

Banyai agreed that the tax code should be simpler, but she called for ending “loopholes that allow people to take advantage of our tax system much like we’re seeing right now with our president, Donald Trump, having only paid $750 for two years on his taxes.” Trump’s taxes were the subject of a report in The New York Times this week.

She also eschewed economic austerity policies, saying that more emphasis should be put on the “efficiency and implementation” of programs. Also, she argues, the government is not running out of money because it has the ability to print more if the American people need it.

“Taxes are a way to get buy-in, a stakeholder-ship by the American people into our system,” she said, adding later: “We can afford the things that we need in this country. But we cannot afford waste and corruption like we’ve seen under the likes of Donald Trump and his administration.”

On the question of the federal debt, which is projected to soon reach $26 trillion, both candidates again disagreed.

Donalds said he would support an amendment to the Constitution requiring a balanced federal budget, similar to the requirements states like Florida have.

“We have career politicians in Washington, D.C. who don’t know how to control spending,” he said. “It is critical because we’re not just borrowing money out of thin air, we are borrowing the taxes on the future earnings of our kids in colleges, our kids in high school, our kids in elementary school and children who have not been born yet.”

Banyai argues that the federal government is more sophisticated than a household budget that needs to be regularly balanced. Referencing deficit spending, she noted that the government has the ability to produce funds when it needs them.

Emphasis on the deficit and the federal debt, she said, is often just a backdoor means of criticizing “programs that you don’t like and kill them under the guise of fiscal responsibility.”

“And I am tired of it because we know that money goes to the top all the time,” she said. “But we need to have policies and programs that will help everyday American people.”

Donalds has long been an advocate of using taxpayer dollars to help fund children to go to private schools. On Monday, he said that public schools have historically been a good thing for the country but that they have become outdated.

He noted that his mother took him out of a Brooklyn public school and paid for private schooling because she was unsatisfied with its education.

“I believe that public money should follow the child. Parents should have the ability and the authority, frankly, to make decisions on the academic environment that the children need to best suit their academic interests,” he said.

Banyai said no public money should be used for private educations. If parents want to send their children to private school, they should pay for it, she said. Otherwise, public schools get drained of needed funding.

“When we’re talking about public dollars for education following the child, he means he wants them to follow that child to a charter school that can make money off of them,” she said. “This is a gross injustice to the child when those schools fail because they don’t have oversight, or they get a substandard education because there is very little accountability.”

For those who missed the debate and want to watch it in its entirety, visit the Facebook pages of The News-Press or Naples Daily News.

Frank Gluck is a watchdog reporter with The News-Press and the Naples Daily News. Connect with him at [email protected] or on Twitter: @FrankGluck.

Fri Oct 2 , 2020
Getty U.S. Treasury Secretary Steve Mnuchin. In a last-ditch effort to pass legislation before the November 3 election and assist the millions of Americans struggling to make ends meet, the White House proposed a $1.6 trillion counteroffer for another round of coronavirus relief. Treasury Secretary Steven Mnuchin discussed the plan’s […] 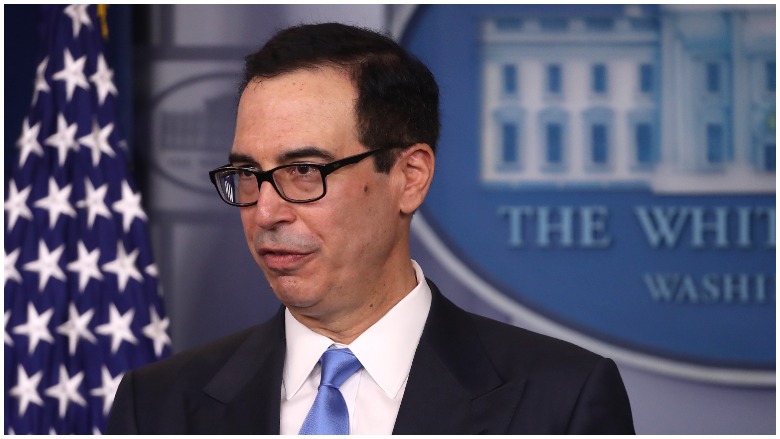