Text size People wear the mask while tour in a shopping street in Wuhan on October 2, 2020 during the national holiday in Wuhan, Hubei province.China. Getty Images For months China’s economic recovery has been a global success story, but maintaining that success depends on a number of factors that […]


For months China’s economic recovery has been a global success story, but maintaining that success depends on a number of factors that can be fickle—Chinese consumers, exports, and income growth.

A revived Chinese consumer would accomplish two goals: It would give a shot in the arm for a weak sector of the economy, and it would help wean the country off reliance from overseas markets and global disruptions like the U.S.-China trade war and the pandemic.

“China is forecast to grow by 2.0% in 2020–boosted by government spending, strong exports, and a low rate of new Covid-19 infections since March, but checked by slow domestic consumption,” the World Bank said in a recent report.

economists were more upbeat in a recent note, saying income increases and ”demand for discretionary purchases, as well as services consumption, should continue to improve due to higher consumer confidence.”

In the popular Taikooli shopping district in the western metropolis of Chengdu, shopper Wang Wei, 21, sipped a milk tea and when asked what he was hunting to buy, he said, “Nothing really. Just out for a walk.” When asked if he feels confident spending on consumer items, he said he’d prefer to wait a few more months to make sure the economy and his job remain stable.

Consumption aside, other sectors are recovering unevenly as well. China’s so-called New Economy Index (NEI) fell in September for the third straight month, indicating that high value-added sectors such as high-tech goods, advanced equipment, and tech investment declined. The average entry-level salary in these sectors fell more than 11,000 yuan ($1,620), according to the NEI survey, which doesn’t bode well for consumer spending.

This uneven economic improvement is reflected in exports as well. Textiles and health-care equipment are faring best this year so far, with clothing experiencing the steepest decline, according to China’s General Administration of Customs.

The rebound is also helping to propel stocks: the Shanghai Composite Index is up 5.5% so far this year.

China’s other, longer term concern, remains its isolation from traditional trading partners. Besides the U.S.-Chins trade war, Japan approved incentives worth $2.2 billion in April to lure its manufacturing of high-value goods back home.

The curious case of China is that its generally impressive, if uneven, recovery doesn’t seem due solely to controlling the coronavirus. Other regions like Taiwan, South Korea, and parts of Europe have largely brought the virus under control but are still expecting economic contraction this year. In fact, China is the only G-20 country projected to grow in 2020. Next year it is projecting an unrivaled 8% growth.

Part of that is strong leadership and a high degree of confidence in near-term economic conditions. In seven regions, including the U.S., Europe, and India, China confidence in its economic performance over the next six month towered above all the others, at 93%, according to a recent McKinsey & Company report.

McKinsey added that global economic surveys show that “almost universally (except in China), the economic situation now is perceived to be worse that six months ago.”

Compared to the rest of the world, China seems to have the rosiest economic picture. Time will tell if that recovery is sustainable.

Wed Oct 7 , 2020
The global lime market size is expected to grow by 20.60 million tons during 2020-2024. The report also provides the market impact and new opportunities created due to the COVID-19 pandemic. We expect the impact to be significant in the first quarter but gradually lessen in subsequent quarters – with […] 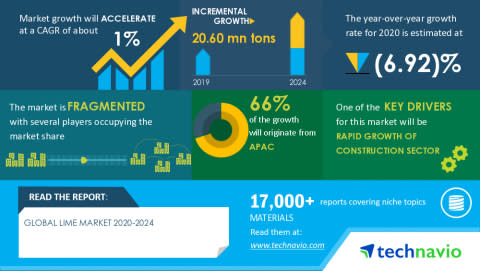