The GBP/CHF currency pair, which expresses the value of the British pound sterling in terms of the Swiss franc, continues to trade at prices that are close to all-time historical lows. Indeed, GBP/CHF set an all-time low in 2020 at the 1.11 handle. The monthly candlestick chart below illustrates this. […]

The GBP/CHF currency pair, which expresses the value of the British pound sterling in terms of the Swiss franc, continues to trade at prices that are close to all-time historical lows. Indeed, GBP/CHF set an all-time low in 2020 at the 1.11 handle. The monthly candlestick chart below illustrates this. 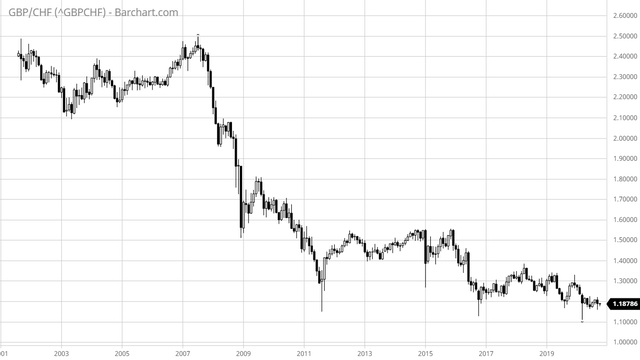 With no robust level of support, one might suspect further downside. Expecting long-term upside at this juncture would certainly be a contrarian viewpoint to take, as evidenced by price action which has been decidedly negative for many years. EUR/CHF is at a similar juncture, as shown in the chart below on the same time horizon. 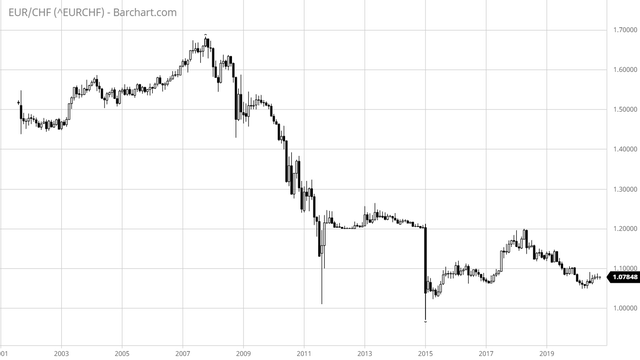 One of the most significant points in history for the Swiss franc was January 2015, the month in which the Swiss National Bank (Switzerland’s central bank) abandoned the EUR/CHF peg which had historically limited CHF strength. The immediate move was significant (as shown in the charts above, in January 2015, GBP/CHF, for example, dropped from about 1.55 down to as low as 1.26, before closing at 1.38 at the end of the month). Yet, in the grand scheme of things, for GBP/CHF the move would seem like a mere blip. Several new all-time lows have been registered since January 2015. The move was more significant for the euro, and the subsequent euro weakness has ushered in persistent SNB intervention (which has demonstrated limited success).

The EUR/CHF and GBP/CHF positive correlation remains though, even if their movements in relation to CHF are mixed. EUR and GBP are both considered riskier European currencies, while CHF serves as a kind of European safe haven. The euro and British pound sterling are also considered riskier owing to the Brexit threat which still remains. The deadline for a formal U.K.-EU trade deal is 2020 year-end, while risks remain beyond 2020 (especially for the U.K. in the event that no formal agreement is found). As regards the Swiss franc, the smaller economy of Switzerland relative to the euro area in aggregate also naturally amplifies the prevailing CHF bias, which is, in this case, to the upside. Threats such as Brexit and COVID-19 have strengthened the demand for safe havens like CHF.

Switzerland is itself considered a safe haven due to its relative political stability, positive current account surpluses, and historical ability to serve as an accommodating and geographically proximate safe haven to other major European countries that use the euro (such as Germany, France and Italy). The SNB regularly intervenes to stem CHF strength in order to improve the country’s export competitiveness. However, in spite of all the intervention, CHF keeps strengthening, while the country’s current account-to-GDP ratio is still very high at 10.20% in 2018 (see chart below).

In spite of this, Swiss inflation struggles to stay positive. As shown below, the country registered year-over-year consumer price declines of 0.80% in September 2020. That is in spite of its official short-term interest rate of negative 75 basis points.

Naturally, the SNB is frustrated at this. Somewhat ironically, the country’s economy might even benefit from some domestic political instability of its own; that is, considering its relatively high stability as compared to Europe. Markets have long been sceptical of the euro’s international value owing to scepticism of the longevity of the European Union and eurozone structures. However, creating political instability on purpose would be a crazy and counter-productive strategy. Yet, perhaps to “kill two birds with one stone”, the SNB could simply concede and adopt an extremely aggressive intervention strategy in spite of being on the U.S. Treasury watch list as a probable currency manipulator.

As reported by ING Economics, per the U.S. Treasury’s somewhat arbitrary rules, Switzerland can be considered a currency manipulator on the basis of several key factors. One or two factors alone would not be concerning to the U.S.; a combination of “violations” is what the U.S. Treasury monitors for. Firstly, Switzerland maintains a significant goods surplus with the United States. Secondly, it has a high current account as a percentage of GDP. The country’s central bank also makes significant net “sales” of CHF (FX reserve accumulation), and fourthly, this CHF liquidity has persisted from (and over) 6 to 12 months. ING’s full report can be found here, which makes a good case.

Being labelled a currency manipulator could suggest to the market that the SNB could start to pull back from its interventions, which could fuel a fresh wave of speculative CHF buying. Therefore, in my opinion, the SNB should simply disregard the U.S. Treasury’s report and adopt an extremely aggressive interventionist policy. The SNB has already acquired a substantial U.S. stock portfolio, which is a frankly incredible, but also clever, strategy considering that the U.S. is far less likely to come down harshly on the Swiss; forcing the Swiss to reverse its interventions could threaten U.S. equity markets both indirectly and directly.

The Swiss could expand its strategy to make significant purchases of European stocks, which would help to bring EUR/CHF higher. Since Switzerland is a small economy, such moves would be unlikely to disrupt the world in any significant way; both the United States and Europe have bigger fish to fry. Meanwhile, the SNB could essentially print money (at effectively no cost) and make significant acquisitions of income-producing assets (i.e., equities, for example). Further, if this strategy ever began to “pull off” and devalue CHF, those assets acquired (denominated in alternative FX, i.e., USD and EUR) would suddenly become even more valuable, enabling the SNB to make significant profits.

This would kill two birds with one stone, because the level of monetary aggression here would likely scare many of the speculative buyers away (i.e., the SNB would “create instability” of its own kind), while the weaker CHF might also help to support the country’s domestic inflation (potentially helping to stave off deflation). This might be a currency war, but it would likely be rather one-sided, and therefore, Switzerland would stand a good chance of winning.

I say all of this because I think this sort of strategy may, in fact, come about. The alternatives to an aggressive strategy are, perhaps by definition, weak. CHF already carries the lowest interest rate among all major currencies (the Swiss have the lowest rate in the world, in fact, matched only by Denmark). Even lower rates are unlikely to do much, and could jeopardize domestic business confidence and/or create local and destabilizing investment bubbles. One alternative, “giving up”, would be far too risky considering the recent level of deflation of negative 0.80%. The Swiss also need to create inflation to help devalue the currency, as deeply negative deflation rates improve real yields, which beckon even more CHF strength.

Switzerland’s back is against the wall. I do not know what happens next, but I think the only way forward for the SNB is to surprise markets. I think that the extremely strong Swiss franc is a by-product and unfortunate, unintended consequence of the existence of the euro. The CHF strength we see almost functions as a punishment for Switzerland, delivered by the EUR market, for not joining the euro area. For the Swiss economy to maintain its viability, it must get both aggressive and creative. As the saying goes, every threat is an opportunity.

The opportunity in CHF FX crosses for traders is not clear, yet there is plenty of reason to monitor them. One day the trend will change, and the change will likely be orchestrated by the SNB (by economic necessity). One might argue that the SNB could instead wait until business uncertainty falls (post-Brexit, post COVID-19, etc.), which could dampen the demand for CHF as a safe haven. However, the Swiss franc has been strengthening for years, not just in 2020; waiting has not worked heretofore. I anticipate stronger intervention.

Disclosure: I/we have no positions in any stocks mentioned, and no plans to initiate any positions within the next 72 hours. I wrote this article myself, and it expresses my own opinions. I am not receiving compensation for it (other than from Seeking Alpha). I have no business relationship with any company whose stock is mentioned in this article.

Tue Oct 6 , 2020
The federal government had already promised AU$796.5 million over four years from 2020-21 through its Digital Business Plan to further drive progress towards Australia becoming a leading digital economy by 2030. In its Budget 2020-21, the government detailed the plan that’s aimed at improving productivity, income growth, and jobs by […]