Just when it seemed like the country’s pandemic recovery — and the upcoming elections — couldn’t get any more surreal, here we are. Read on for the business and tech news you need to know for the week ahead, and be safe out there. — Charlotte Cowles Table of Contents […]

Just when it seemed like the country’s pandemic recovery — and the upcoming elections — couldn’t get any more surreal, here we are. Read on for the business and tech news you need to know for the week ahead, and be safe out there. — Charlotte Cowles

The Test Heard Round the World

And you thought the week’s biggest story would be that train wreck of a presidential debate. Instead, as you’ve surely heard by now, President Trump tested positive for the coronavirus late on Thursday, hours after assuring Americans that “the end of the pandemic is in sight.” Global markets faltered as he began isolating at the White House for an unspecified period, throwing his re-election campaign into uncertainty.

Back to last Tuesday’s debate: Somewhere in its smoldering ashes was a brief exchange about the economic recession. Mr. Trump assured viewers that “our country is coming back incredibly well.” But Joe Biden reiterated (presciently) that the economy can’t be fixed until the coronavirus is brought to heel. They also discussed — or yelled about — the recent revelation that Mr. Trump paid a mere $750 in federal income taxes in both 2016 and 2017. He claimed he paid “millions,” but has refused to release his tax returns to prove it, blaming an ongoing audit. (The Internal Revenue Service has said he’s free to share his taxes anytime.) Next: Kamala Harris and Mike Pence are to face off in the vice-presidential debate this Wednesday.

Airlines began furloughing more than 32,000 workers on Thursday as the industry’s efforts to secure more federal aid funding remained stuck in Congress. (This comes after tens of thousands more airline employees took voluntary layoffs over the past few months.) The industry received $25 billion in federal aid through the CARES Act back in March, on the condition that they refrained from broad job cuts until Oct. 1. Now that deadline has blown past and air travel is still down about 70 percent from last year. Several airlines said they would hire back workers if lawmakers provided the funding they need to pay them, and the House speaker, Nancy Pelosi, pledged her support. But it may not be enough to get the votes she needs.

The airline industry isn’t the only one holding its breath for Congress to pass another pandemic aid package. But Republicans and Democrats still can’t agree on what it should cover. On Thursday, House Democrats pushed through a $2.2 trillion stimulus plan that would provide aid to families, schools, restaurants, businesses and yes, airline workers. But it stands little more than a snowball’s chance in hell in the Senate, where Republicans have already pronounced it too expensive. Still, both sides are running out of moves, and with the election coming up, they’re feeling the pressure to do something.

It’s a telling sign of our times that there’s big money to be made in defrauding the unemployment system. A thriving black market for jobless benefits has cost states millions of dollars and become so pervasive in California that state officials have suspended processing unemployment claims to put new controls in place (which will, of course, affect people who genuinely need the money). The Labor Department dedicated $100 million to impose new cybersecurity measures.

Cruising for a Conflict

Remember those horror stories of coronavirus-ridden cruise ships floating around at sea because no port would take them? Perhaps with that in mind, the Centers for Disease Control and Prevention extended its no-sail policy for cruises to mid-February from Oct. 31. As a result, Carnival Cruise Line announced that it would cancel voyages from all of its United States ports except Miami and Port Canaveral for November and December. But then the White House blocked the C.D.C. order, overruling medical professionals who warned that outbreaks on cruise ships could become a public health disaster. I’ll stay home, thanks.

Tue Oct 6 , 2020
SALISBURY — In its first in-person meeting in months, the Rowan County Board of Commissioners heard details Monday afternoon about phase two of a plan to safeguard county facilities against the spread of COVID-19. Pete Bogle, of The Bogle Architecture Firm, presented commissioners with details of the “design phase.” A […] 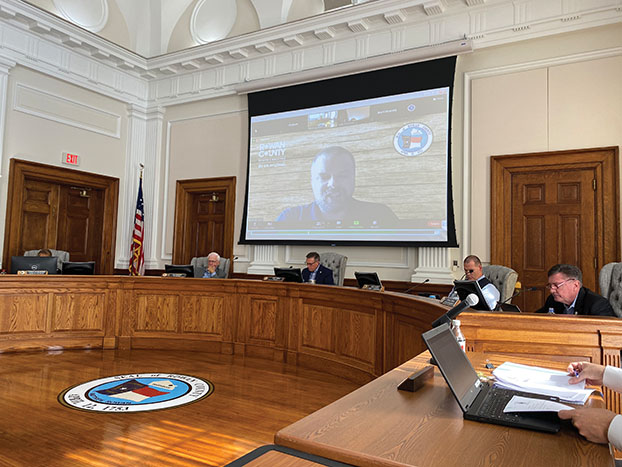