(Bloomberg) — The Trump administration announced sweeping new sanctions on Iran’s financial sector, a move intended to choke off the country’s economy from the rest of the world and raise pressure on its government to enter a new deal constraining its nuclear program. © Bloomberg Iranian national flags fly near […]

(Bloomberg) — The Trump administration announced sweeping new sanctions on Iran’s financial sector, a move intended to choke off the country’s economy from the rest of the world and raise pressure on its government to enter a new deal constraining its nuclear program.

© Bloomberg
Iranian national flags fly near a major highway through Tehran, Iran, on Tuesday, Sept. 17. 2019. Iranian Foreign Minister Mohammad Javad Zarif refused to rule out military conflict in the Middle East after the U.S. sent more troops and weapons to Saudi Arabia in response to an attack on oil fields the U.S. has blamed on the Islamic Republic.


Under the measures, announced Thursday by the Treasury Department, the administration blacklisted 18 banks in Iran that have so far escaped some U.S. restrictions, using authorities designed to punish entities associated with terrorism, ballistic-missile development and human-rights abuses. The Iranian financial sector was also designated as off-limits under an executive order that President Donald Trump signed in January.

The new sanctions were revealed in a web posting by the Office of Foreign Assets Control. They had been telegraphed in advance by U.S. officials, who have been weighing the move for weeks.

“Today’s action to identify the financial sector and sanction eighteen major Iranian banks reflects our commitment to stop illicit access to U.S. dollars,” said Treasury Secretary Steven Mnuchin in a statement. “Our sanctions programs will continue until Iran stops its support of terrorist activities and ends its nuclear programs.”

He said the actions “will continue to allow for humanitarian transactions to support the Iranian people.”

The move all but severs Iran from the global financial system, slashing the few remaining legal links it has and making it more dependent on informal or illicit trade. The country’s economy has already been crushed by the loss of oil sales and most other trade thanks to existing American restrictions imposed after Trump quit the 2015 Iran nuclear deal.

“Amid Covid19 pandemic, U.S. regime wants to blow up our remaining channels to pay for food & medicine,” Iranian Foreign Minister Javad Zarif said in a tweet after the sanctions were announced. “Iranians WILL survive this latest of cruelties. But conspiring to starve a population is a crime against humanity. Culprits & enablers—who block our money—WILL face justice.”

The sanctions proposal had initially gotten a chilly reception from several Trump officials for fear it could complicate the provision of international humanitarian assistance to Iran, which has been hard hit by the Covid-19 outbreak and existing U.S. sanctions. Two of the banks on the sanction list, Middle East Bank and Saman Bank, have been doing the bulk of Iran’s humanitarian trade transactions.

People familiar with planning for the sanctions said they have two objectives. They want to close one of the few remaining financial loopholes allowing Iran’s government to earn revenue, and stymie Democrat Joe Biden’s promise to re-enter the nuclear deal if he wins the presidency next month.

Hardliners who had pushed for the sanctions, including several Republican senators and the Foundation for Defense of Democracies, which had initially floated the idea, argued the humanitarian costs could be mitigated through sanctions carveouts and so-called comfort letters from the Treasury Department. They argue that that trade in humanitarian goods is largely exempt from sanctions and Treasury Department also shields such trade conducted with Iran’s central bank.

Iran has continued to do business with several countries including China and the United Arab Emirates, with total non-oil foreign trade reaching $24.6 billion in March-August, according to the country’s customs administration.

Critics of the hardline approach say Iran is already so heavily sanctioned that one more set of restrictions won’t make much difference. Indeed, the administration introduces new sanctions against Iran on a near daily basis, including Thursday, when the Treasury Department designated two Iranian judges under the Countering America’s Adversaries Through Sanctions Act.

Despite all those moves, the Iranian regime has so far remained defiant and refused to meet with Trump officials. The U.S. has also grown increasingly isolated at the United Nations Security Council, where 13 of 14 other countries on the panel — including several U.S. allies — have rejected its bid to reimpose, or snap back, restrictions targeting Iran’s nuclear program.

Fri Oct 9 , 2020
The global grain augers market is expected to grow by USD 103.70 million as per Technavio. This marks a significant market slow down compared to the 2019 growth estimates due to the impact of the COVID-19 pandemic in the first half of 2020. However, steady growth is expected to continue […] 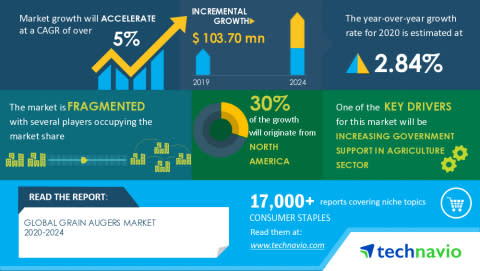