© PHILL MAGAKOE/AFP or licensors South Africa’s largest trade unions held nationwide marches on Wednesday to protest the high level of job destruction, the poor state of transport, corruption and the lack of measures to combat the deep crisis generated in Africa’s second largest economy by the pandemic. The national […]


South Africa’s largest trade unions held nationwide marches on Wednesday to protest the high level of job destruction, the poor state of transport, corruption and the lack of measures to combat the deep crisis generated in Africa’s second largest economy by the pandemic.

The national strike hit key sectors such as transport, industry or education throughout the country, although there were no precise figures to show the extent of mobilisation.

In some cities, despite the fact that the call for this strike was simply to not go to work as a precaution against COVID-19, there were some rallies and protest marches.

“They are telling us that as workers we have to drown in poverty because the government cannot assist us,” Enca Neo Mashike, local leader of one of the public workers’ unions that was supporting the protest today, told South African television from a rally organized in front of the country’s largest hospital in Johannesburg.

Together, the two unions are estimated to have nearly 3 million members.

“What we are raising is that corruption here has taken away from workers. Healthcare workers, workers in the public sector, have died contracting coronavirus because the quality of PPEs that we were given were not of a quality that will defend workers as they are trying to defend our own lives”, said Zingiswa Losi, president of the Congress of South African Trade Unions (COSATU).

According to data from the official South African statistics institute, during the quarter in which South Africa applied a hard lockdown to curb the COVID-19 pandemic, the gross domestic product (GDP) of Africa’s most developed economy plummeted by 51%.

Anti-coronavirus measures virtually paralyzed the country from late March to early June (with only minor easing in May), when activity slowly began to resume.

In that period alone, it is estimated that some 2.2 million jobs were destroyed.

South Africa, however, had already been in recession since 2019 and with exaggerated levels of unemployment of around 30%, which had been stagnant for years.

The South African government projects that for this year the economy will contract by at least 7.2%, leaving the biggest crisis in almost a century, but the prediction could even be too optimistic in view of the data already known.

In view of this debacle, Cyril Ramaphosa’s government announced weeks ago that it will present an economic recovery plan to try to revive activity, but the details are not yet known.

On Wednesday, the ruling party, the African National Congress (ANC), was expected to hold a meeting to discuss the workers’ demands.

What if armed, far-right groups go to the polls? Some plan to

Sun Oct 11 , 2020
Stewart Rhodes, founder of the group the Oath Keepers, center, speaks during a rally outside the White House in Washington in 2017. (Susan Walsh / Associated Press) They go by names like Oath Keepers, Wolverine Watchmen and the Three Percenters. They chat on Gab, Discord, 4chan and other social media. […] 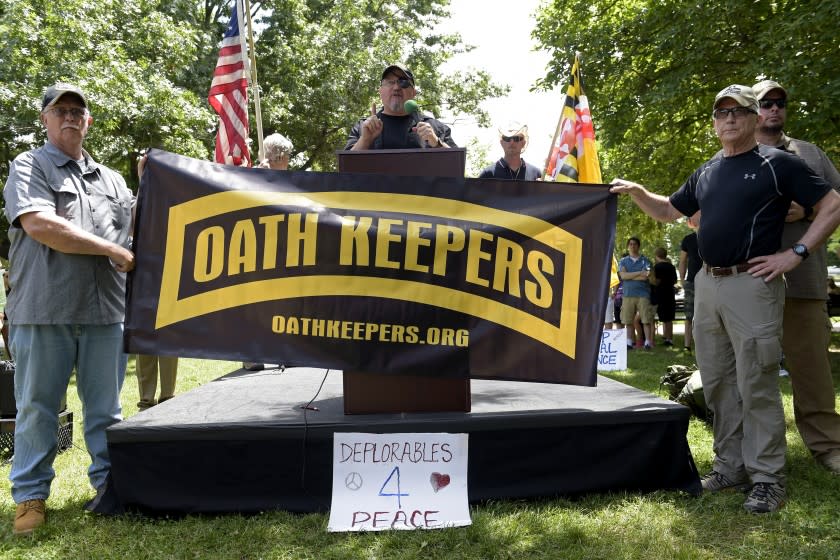