Written by Michael Lewis on October 6, 2020 Advertisement A revered crumbling landmark, Miami Marine Stadium, is once again near a city rescue. Yet once again the city is missing the point: for what purpose is this stadium to be restored at cost of 48 million taxpayer dollars? While officials […]

A revered crumbling landmark, Miami Marine Stadium, is once again near a city rescue. Yet once again the city is missing the point: for what purpose is this stadium to be restored at cost of 48 million taxpayer dollars?

While officials say permitting to restore the crumbling Virginia Key stadium is near, to be followed by a contractor and then construction, that all puts the cart before the horse: what will be the engine to make the stadium more than a site restored at high price and then left to rot once again?

Without a business plan, restoration followed again by decay is a sure bet.

The notion of restoring a stadium once used for boat races and concerts on Biscayne Bay is romantic. Who cannot envision a lovely spring evening or autumn day in the stands, on the water, watching – exactly what?

Boat races? That’s what the stadium was known for before Hurricane Andrew battered it in 1992 and left it unused since.

Races sound great, but none were held there for the five years before the hurricane because nobody could make them profitable. How would they be profitable now? Where is the demand by a promoter? 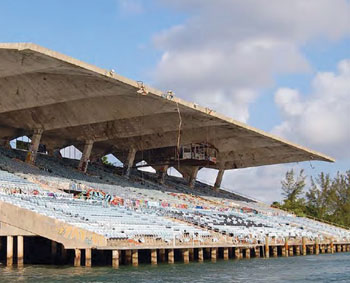 Concerts? The stadium used to house concerts of all sorts.

Other events? A consultant listed more than 50 possible uses. Some might actually work – if there were a demand by promoters. But we have been shown no demand.

Plus, timing is everything. In the teeth of a pandemic that has barred meetings and conventions and concerts, a new now-unusable venue would be particularly ill-timed. We will control the pandemic, but when and how remain unclear. This is not the time to plan a venue when others sit vacant and bleeding money.

It’s senseless to restore the stadium without a solid business plan and an operator lined up to program it, fund its upkeep and pay Miami enough to finance $45 million in bonds for construction plus interest – at least $3 million a year for 30 years.

That means putting a solid operator under contract and getting city hall buy-in on uses. Without firm primary uses, a restored stadium might lack what’s needed – for example, dressing rooms for performers.

Even those steps would require the city to borrow $45 million that could be used elsewhere – affordable housing for example. There might be other great needs before restoring a stadium that lost more than $1 million a year when it operated.

Of course, city government is not a profit center. It spends tax money to provide for community needs. Police and fire departments don’t turn profits. Municipal buildings don’t break even. So commissioners could decide in good faith that using $3 million or more in taxes a year for 30 years to restore Miami Marine Stadium is a good investment for public use.

But first, they’d have to show what that good use is and how the city could keep the stadium in good repair and operating to fulfill that purpose.

Which brings us back to the basics of a business plan: who will operate the stadium, what will the programming be, where is the demand for that programming, where will the upkeep money come from, what if anything will the city be repaid, and how will the whole thing be guaranteed?

A guarantee is vital. Bonds can be for 30 years, so taxpayers would assume a 30-year mortgage. How good is the deal, how reliable the operator, how realistic the plan?

Miami is littered with the bones of failed projects. Pepper Fountain was built in Bayfront Park at high cost, but the city couldn’t pay to keep water flowing. So Miami ripped out millions in plumbing meant to put on a water show and for years the fountain was dry, just like a flying saucer crashed in the park.

As for restoring Miami Marine Stadium in hopes someone will later figure out how to program it without loss, look at Homestead, which build a stadium for Major League spring training. The Cleveland Indians backed out of a deal after Hurricane Andrew, and only two spring games were ever played there. The ballpark, built with countywide taxes, was torn down rather than pay to maintain it.

Look at the Orange Bowl, demolished because the city couldn’t maintain it. Such a fate is also threatened at the magnificent Olympia Theater downtown, where the city for many years funded losses.

In any plan for Miami Marine Stadium, the city must reveal future use for the surrounding land. The city pledged soccer fields and green space but instead paved it over for annual boat show use. Otherwise, it’s bare, bad for the environment and terrible use of public land.

The city also needs to spell out the future, funding and use of a building quietly targeted in front of the stadium. It’s a future ghost structure in front of a current ghost stadium. What is that shadow building for and how real is it?

Two years ago Commissioner Joe Carollo called for a five-year plan for the stadium.

Go beyond that: the city should not do a lick of stadium work without a 30-year plan that spells out uses, users and costs for the whole site. No business would think of proceeding without one. Why would the city?

Thu Oct 8 , 2020
Xbox marketing boss Aaron Greenberg has shed a little light on whether Microsoft will be increasing their game prices for next-gen Xbox Series X and Xbox Series S titles, like Activision, Sony, and others. © Provided by GamesRadar null Speaking on the Real Deal Xbox podcast earlier this week, Greenberg […]